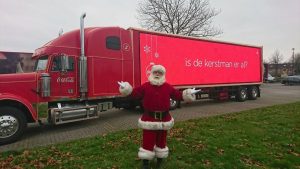 Commissioned by Start the Chase and Coca-Cola Nederland, we provided Santa Claus for the second year in a row. During the Magical Christmas tour throughout the Netherlands you could find our Santa at the Christmas truck.

The Coca-Cola Christmas truck, the real Santa Claus and his Christmas elves were in action from December 6 to December 24 and can be found in many places in the Netherlands. The Christmas truck is equipped with a huge Led panel on which you can thank your own Christmas hero with your own text message.

Need Christmas entertainment or the real Santa Claus next year?
Call us for the possibilities without obligation on telephone number: 0297-521919.